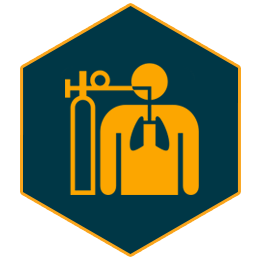 COPD is short for chronic obstructive pulmonary disease. People with COPD have a hard time breathing, because of damage to their lungs. The lung damage is typically caused by prolonged exposure to cigarette smoke, air pollution, or to other risk factors such as dust, chemicals, and fumes. Unfortunately, there is no cure for COPD. Furthermore, COPD is a progressive disease, which means that the symptoms will get worse over time. Eventually, even simple tasks such as getting dressed and going for a walk become extremely difficult.

How to relieve COPD in a natural manner

In case of COPD, doctors typically prescribe a number of different drugs such as bronchodilators, antibiotics, and corticosteroids. However, the efficacy of medication varies from case to case, and side effects such as mood changes, diabetes, and cataracts might occur. Luckily, there are also a number of fully natural ways in which the symptoms of COPD can be relieved.

Quit smoking. Smoking is the number one cause of COPD and quitting is the only practice that is known to slow the progression of the disease. Behavioral strategies, nicotine replacement, and education can help those who struggle to quit smoking.

Maintain a healthy diet. A healthy diet is very important for those who suffer from COPD. For instance, drinking enough fluids throughout the day will help to thin mucus, which makes it easier to cough. Eating properly is also vital, as becoming overweight or underweight can worsen related symptoms. When you deal with being overweight, breathing becomes harder. On the other side, underweight causes a lack of energy, and people with COPD already expend extra calories on their labored breathing.

Be as active as you can. Exercising as much as possible is an important part of managing COPD. Your exercises should focus on strengthening the cardiovascular system, lowering blood pressure, maintaining a healthy weight, and building energy. Exercising can aid COPD patients in undertaking activities that would normally leave them tired and out of breath.

Prevent infections. Infections are the number one cause of exacerbations in COPD. Exacerbations are episodes of existing symptoms manifesting to a degree that significantly exceeds the normal range. In a lot of cases, exacerbations are a reason for hospital admittance. Boosting immunity, avoiding crowded places during flu season, and vaccinations can reduce the risk of infections and exacerbations.

The Wim Hof Method can help those who suffer from COPD to drastically improve their quality of life. The unique combination of breathing exercises, controlled exposure to cold, and commitment has benefits in a number of areas. For example, the method can give those who want to quit smoking the willpower to do so. But it can also help relieve some of the stress that is related to daily struggles with regards to COPD. It has a positive influence on immunity and the prevention of infections, and it can be of enormous help in strengthening the cardiovascular system.

Getting started with the Wim Hof Method is as easy as signing up for our Fundamentals online video course on this website. The star of the video course is Wim Hof himself, as he guides you through the principles of his method. The strength of Wim’s method is that you can practice it anywhere and at any time. People from all over the world benefit from the Wim Hof Method on a daily basis. You can watch some of their stories here.

The foundation of the Wim Hof Method consists of breathing exercises, controlled exposure to cold, and commitment. Together, these three pillars have powerful effects, which is documented in a number of scientific studies. Followers of the Wim Hof Method report benefits that include increased sports performance, enhanced creativity, more energy, less stress, and relief from symptoms related to several common diseases. Start your journey today by signing up for our Fundamentals video course!

Wim Hof Method is assesed on average with an 9.5 out of 10 based on 2147 experiences written by participants

Tineke, The Netherlands
I have severe arthritis in my left hip. By implementing the Wim Hof Method in my daily life, I can deal with this without getting surgery. I love Wim’s purity. His coaching inspires me and gives me energy. I’m almost 66 years old and by practicing the Wim Hof Method I feel much more...

Aivar, Estonia
I am 52 years old, and after 10 weeks of the Wim Hof Method I am in the best shape I have ever been. I did 30 push-ups as a test before I started the course, and when I finished I did 100 push-ups for the first time in my life. The Wim Hof Method gives you a good mood, it’s addictive!

Monic, The Netherlands
It’s only been 4 weeks since I started, but the results are remarkable! Thank you from the heart for changing my life, my health, and my understanding about my own power and the influence I have on this. I’m looking forward to a nice cold winter in the Netherlands.

Mino, Germany
Learning Wim’s method is like studying from one of nature’s best students. My life long fear of cold is history. I now fully enjoy cold immersions, but the benefits are not limited to cold. I am now a better person and a happier being. I smile when facing life challenges.

Gregor
After 8 months of daily Hoffing, puffing and cold showers I can claim to be cured of my 5 year burnout. Not having had a single cold or flu, my sore knee is working perfectly again, which was very painful the last 2 years. It is like a miracle, and I’m really grateful that our paths crossed.

Franco, USA
Wim I hope to train with you someday. I love to jump into that cold water and climb that mountain with you. Your method has truly helped me with psoriatic arthritis. I am no longer taking Humira injections for my symptoms. I am controlling it with breathing, cold showers and ice baths.

Matthew, Australia
I would have paid $10,000 for this, but that would not be enough because this has changed my life. I feel like I have taken Valium yet am supercharged. As a clinical psychologist my days can be very stressful. There is a stillness inside me now, and what I am really amazed by is the peace lasts.

Per Kristian, United Kingdom
After 3 weeks of daily practicing my medication (Naproxen) for long-standing sciatica has been cut by 80%, and my arm pain and 'pins and needles' following a neck injury 50 years ago has been halved!

Arthur, USA
I got anxiety 2+ years ago, and have had panic attacks every day since. Medicine helped a little. I came across your videos and started to walk my 2 miles a day in only a t-shirt at 20F degrees. Within 2 weeks my anxiety went away! I found it to be a miracle.

James, USA
I’ve had astonishing results battling addiction with the Wim Hof Method. It has saved my life and is the only thing that worked on getting clean and healthy. I go ahead and get my suffering over with in the cold showers, so I don't have to suffer throughout the day. Pretty good trade to...

Grant, Australia
I was born with Spina Bifida, and was told I would end up in a wheelchair. After incorporating the Wim Hof Method into my daily life I have begun to see results in my pain levels and athleticism. I am no longer looking down the barrel of becoming a paraplegic, and I attribute that in part to the...

Benjamin
I started the Wim Hof method in October of 2018, and now the holes I had in my brain are gone. My neurosurgeon was so impressed by the scans that he told me I don't have to come back anymore. I take this as proof that this method works to regenerate brain tissue.
›